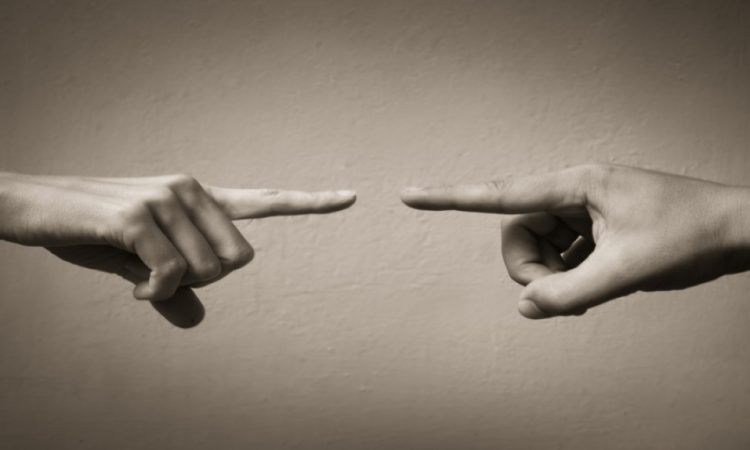 Not too long ago Kensi and I were bombarded by the boys who were being very vocal in denying responsibility for what had occurred, pointing fingers at each other and both saying, “No YOU!” I turn on the news a little later after the situation is resolved and watched a few snippets, to which it all reminded me of what my children were doing. The word that repeatedly came up was “BLAME!” Blame has to do with who is responsible for a fault or wrong. I’m sure that we have, at one time or another, done what is called “shifting the blame” for something that happened. As children, I’m sure we did this a lot, or at least I know I did!

I’ve heard a lot of the back and forth over the years from folks in what I call “The Blame Game.”  One company that deals with their fair share of people who play ‘the blame game’ is the insurance companies. The following statements make this clear as follows: “I collided with a stationary truck coming the other way.” “A pedestrian hit me and went under my car.” “As I approached the intersection, a sign suddenly appeared in a place where no sign had ever appeared before. I was unable to stop in time to avoid the accident.” “An invisible car came out of nowhere, struck my car and vanished.” “The telephone pole was approaching. I was attempting to swerve out of its way when it struck my front end.” I could go on and on with more, but I think you get the idea.

The blame game has been going on since the beginning of man. In Genesis 3, Adam blamed God who GAVE HIM that woman EVE who caused him to eat of the fruit, Eve blamed the serpent. In Exodus 32, Aaron blamed the people and the mystical fire that produces golden calves! Again, it’s called shifting the blame! Blame-shifting is when “a person does something wrong or inappropriate, and then dumps the blame on someone else to avoid taking responsibility for their own behavior.” Friends we live in a society that is all about shifting the blame. I have had folks tell me that the reason they are the way they are is because of their dad, their mom or someone else. Or the reason they are the way they are is because of the “cards they have been dealt” and what was “inherited.” I’m here to tell you that is false!  Now those folks or circumstances may have had an influence for sure, but they didn’t make anyone do anything!

God said through the prophet Ezekiel in Ezekiel 18:4, “Behold, all souls are Mine; The soul of the father as well as the soul of the son is Mine; The soul who sins shall die.” The Lord through Ezekiel is saying that one cannot blame their ancestors for the choices that they are making for themselves and in the way that they are bringing up their own children. In Ezekiel 18:5-20 you will find some examples provided to the people to assist them in understanding how choices work. The Lord through Ezekiel will go on to explain in verses 21-32 that a wicked man can turn from his wicked ways, but also notes that a righteous man can also turn from righteousness and become unfaithful. It all comes down to one’s own choices.

What the Lord desires is what we should desire. LIFE! Notice in verse 32: “For I have no pleasure in the death of one who dies,” says the Lord God. “Therefore turn and live!” This again goes back to choice! It was up to the people of Ezekiel’s time to CHOOSE to REPENT & LIVE. They had to STOP PLAYING THE BLAME GAME!

What the people of Ezekiel’s time needed is the same thing we need today. As verse 31 says: “Cast away from you all the transgressions which you have committed, and get yourselves a new heart and a new spirit. For why should you die, O house of Israel?”

They needed a heart transplant just like us. A choice “NOT to conform to this world, but to transform by the renewing of our mind to prove that which is good and acceptable, the perfect will of God” (cf. Rom. 12:2).

Jesus died on the cross of Calvary so we could have that NEW HEART, that NEW LIFE through HIM. We have to take responsibility for our own sins (cf. Rom. 3:10, 23, 6:23), sins we are accountable for, but by the grace of God, who gave His only begotten Son Jesus Christ to die on the cross for the remission of our sins, we can be forgiven. We turn away from the world and its sinfulness, and we deny the fleshly self and we repent of our sins, confessing Christ to be the Son of the Living God and are baptized for the remission of our sins (Romans 6:3,4).

If I can help you in turning your life around, making the choice to follow the Lord and His will, please let me know.

Something to think about. Have a great week! 😊